One of the best feature introduced with the latest update of Logic Pro X 10.1 is the new GUI for the built-in compressor plug-in. With this new interface is much easier to access the different emulations of circuit type that were a «hidden secret» for many users in the previous versions.

Some hardware compressor had become standards not just because of their ability to compress audio but also for the tonal quality and the side-effects added to the signal. With the advent of DAWs and software plug-ins developers had to emulate this effects, especially with the compressors.

These are the main classes of circuit types used to build hardware compressor:

Before the introduction of Logic Pro X 10.1 we just had a small dropdown menu to choose the circuit type. Many users ignored it and kept using the Platinum which was (and still is) the default choice. This circuit is built by Logic’s developers and although it is very powerful, it doesn’t have any sound quality nor emulates any renowned compressor. If you’re one of that kind of users, please keep reading.

The other circuit types were in fact emulations but nobody could name exactly all of them (try a quick search on google to find the guesses), until now. With the new GUI, developers helped us a lot: we can name exactly every emulation thanks to the colours of the panel and the design of the knobs. Now you’re probably asking yourself: “Why is this so important”? Because there are many books, articles and tutorials about which compressor is best for vocals, guitars, drums and any other source. If you learn which circuit type you’re using, you’ll become a better engineer by using Logic’s built-in compressor (and you’ll save a lot of money on third-party plugins). 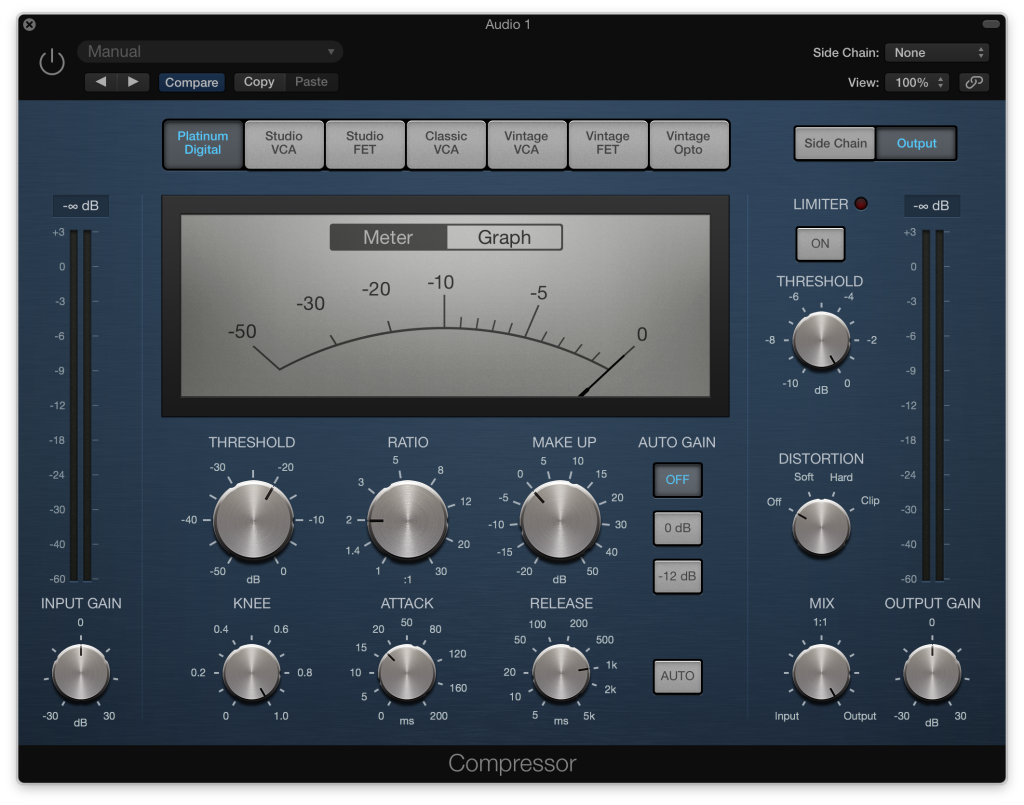 As said before, this circuit is Logic’s own design and it’s the default setting when we load a compressor in our channel strip. It can be very helpful in some situation because of its transparent sound. 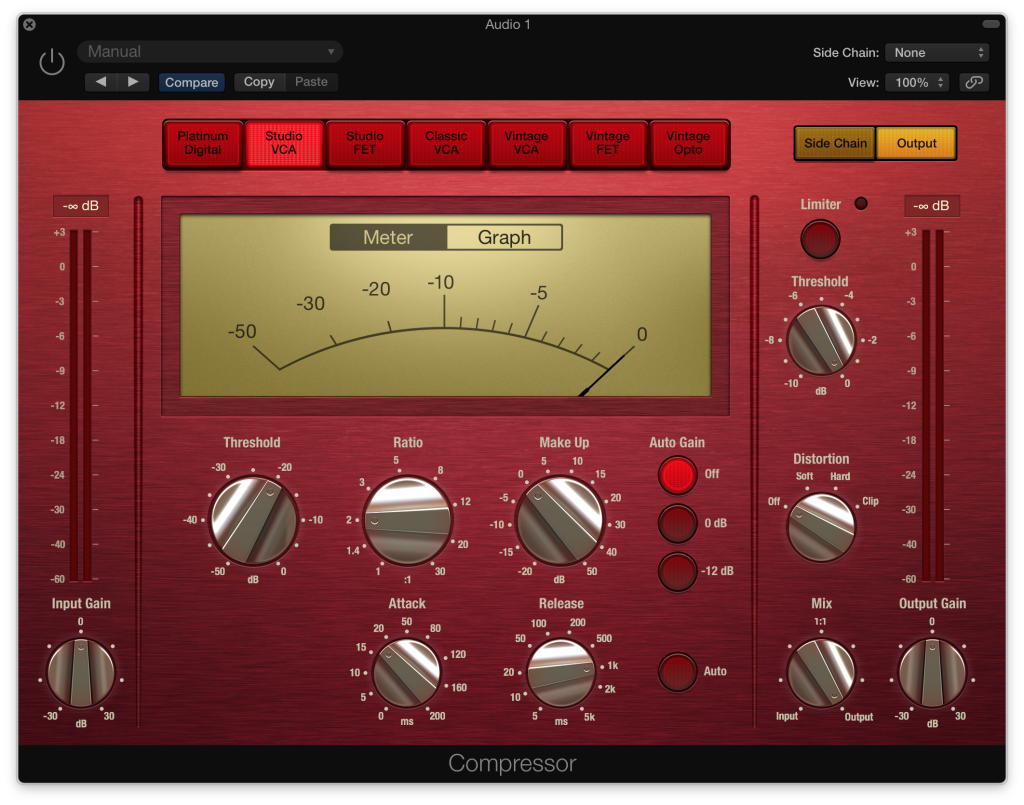 This circuit type has been introduced with this latest update so it is completely new. The Studio VCA is an emulation of the Focusrite Red 3 Dual Compressor and Limiter (you can find the user manual here). As the name implies, the original hardware version can be used as a stereo or dual mono compressor and has its own limiter module which can ben enabled separately. The controls are: ratio (1.5:1, 2:1, 3:1, 5:1, 7:1 or 10:1), threshold (the original range is between -24dB to +12dB), attack (fast to slow), release (from 0.1 to 4 seconds) and make-up gain.

Logic Pro X allow us to user different values for all this controls but I strongly suggest you to stick with the original values: anything is easier to use when you have less choices. 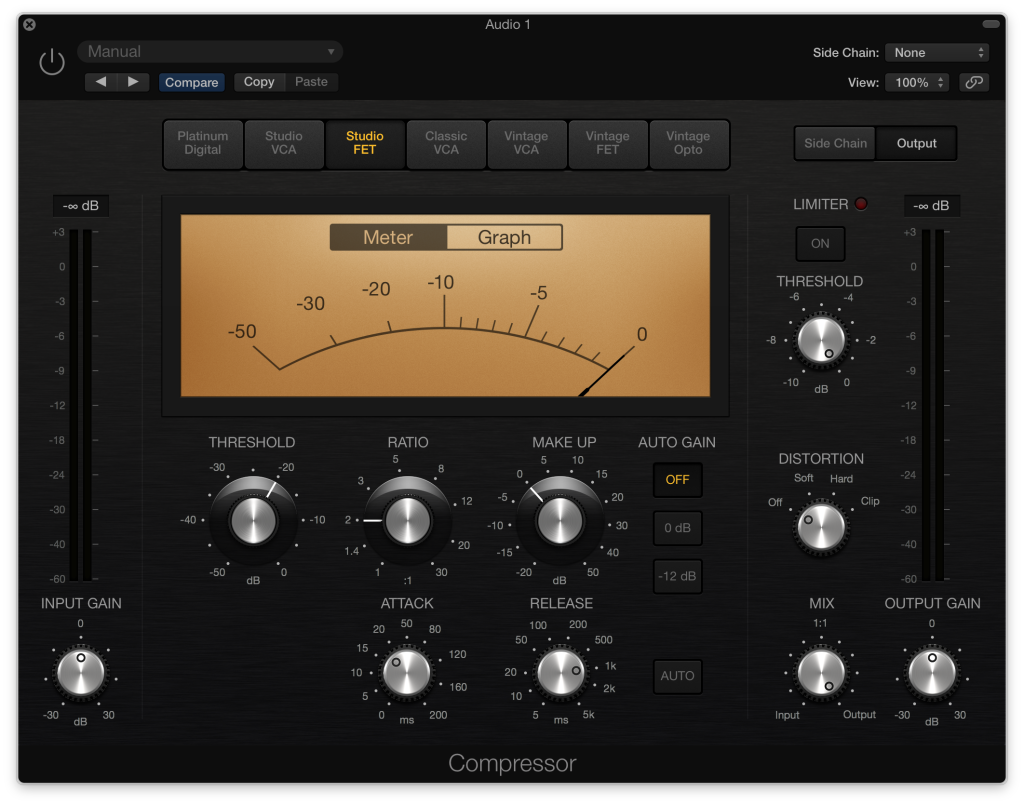 The Studio FET circuit type emulates the Universal Audio 1176 which is still available on the market in its hardware version. The controllers available on the original compressor are: input, output, attack (from 20 to 800 microseconds), release (from 50 to 1100 milliseconds), ratio (4:1, 8:1, 12:1 or 20:1).

Unfortunately on Logic’s version of this compressor is not possibile to emulate the “All-Button” mode (all the ratio buttons pressed simultaneously) which many engineers love for its pumping sound. 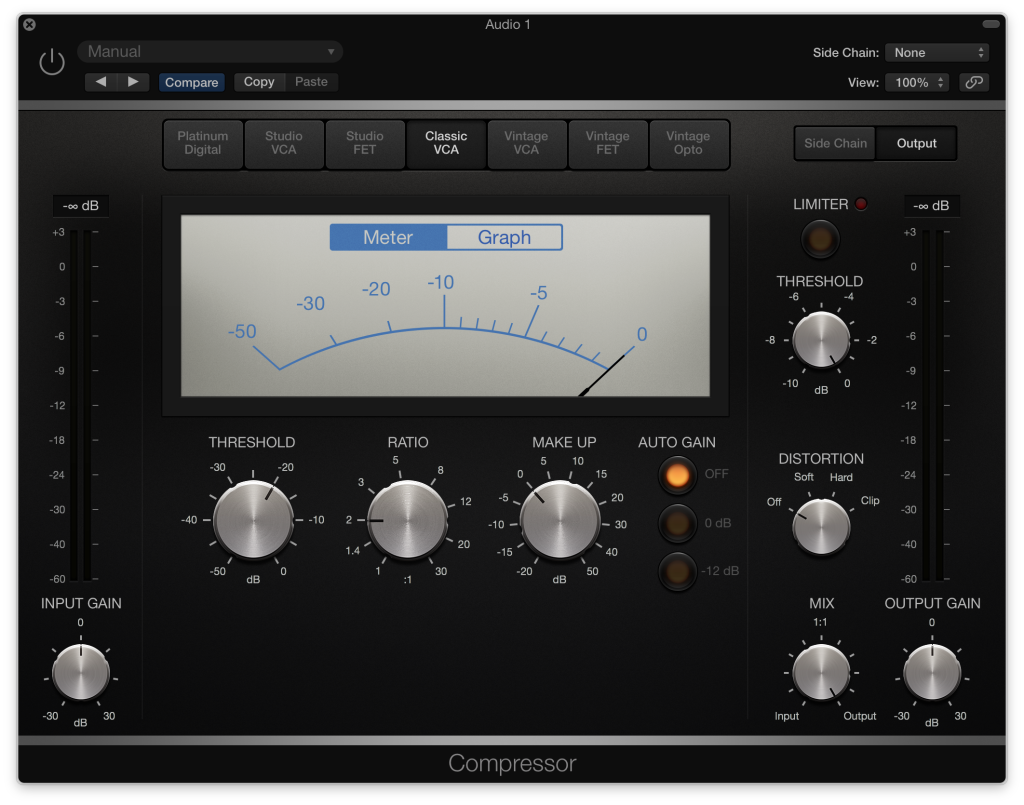 The Classic VCA duplicates the discontinued DBX 160 compressor/limiter (the original user manual can be downloaded here). The controls on the original hardware are: threshold (from 10mV to 3 volts), ratio (from 1:1 to 120:1) and output gain (from -20dB to +20dB). Since the attack and release parameters are not available on the hardware, those knobs aren’t available on the plugin either. 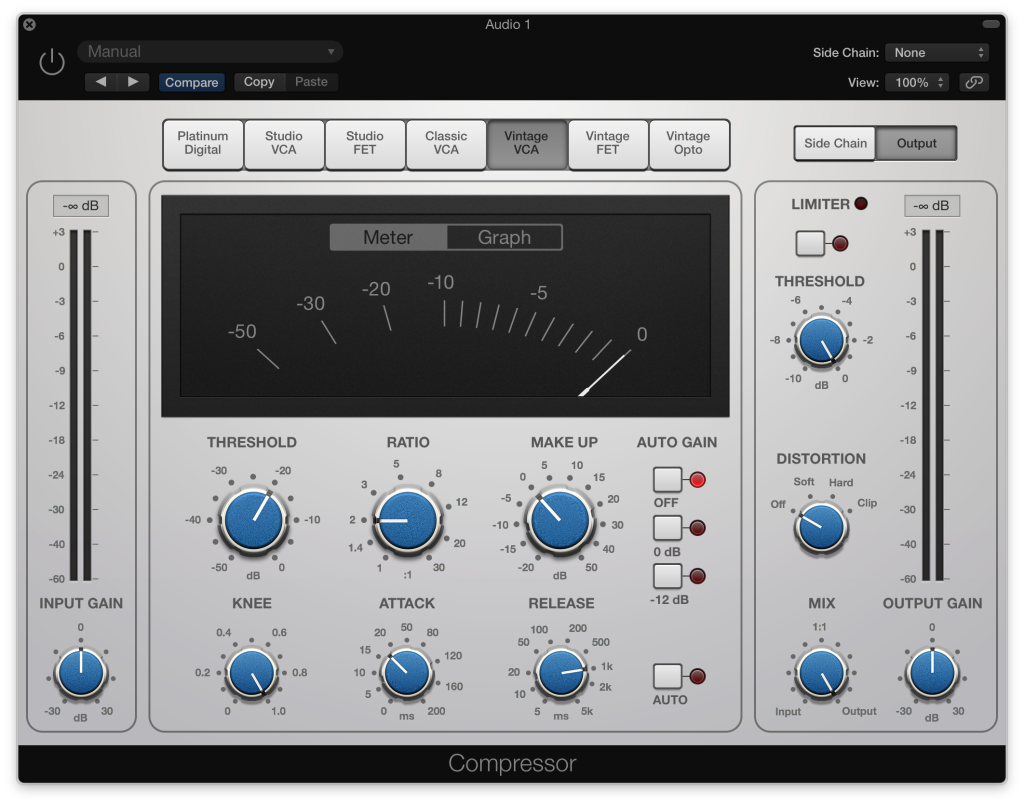 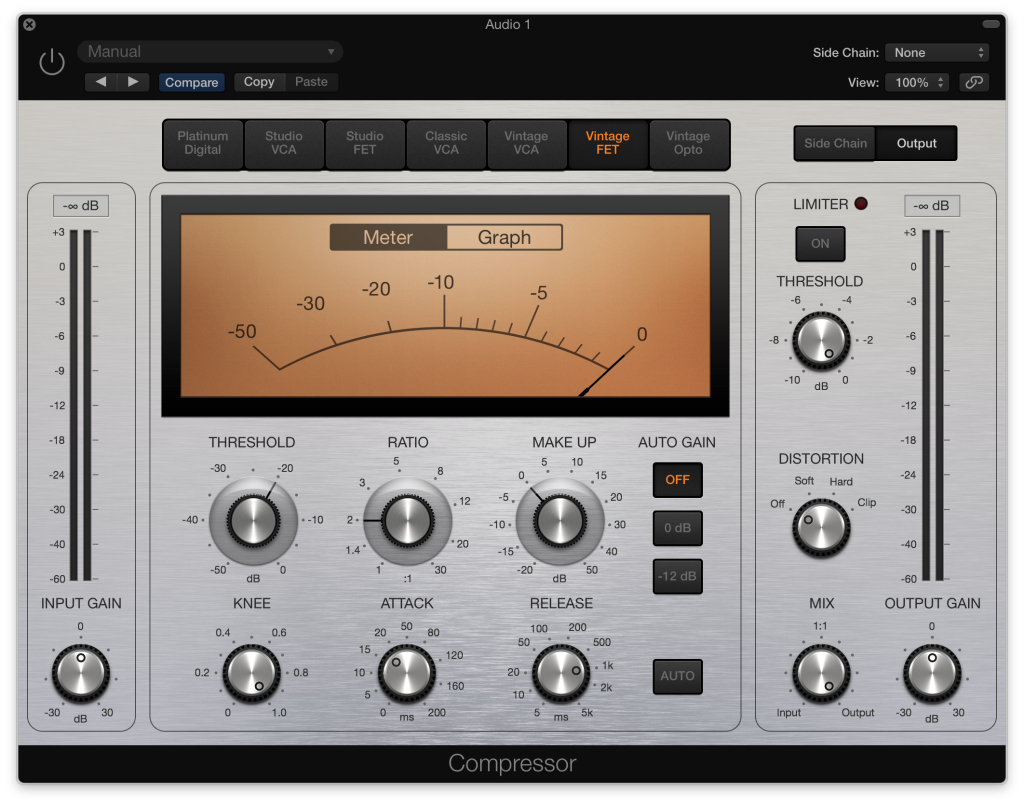 Vintage FET is the emulation of the UREI 1176 Silver Face. Which had different components compared to the Universal Audio 1176 but the same controls. As above, we can’t access the “all-button” mode in Logic’s version. 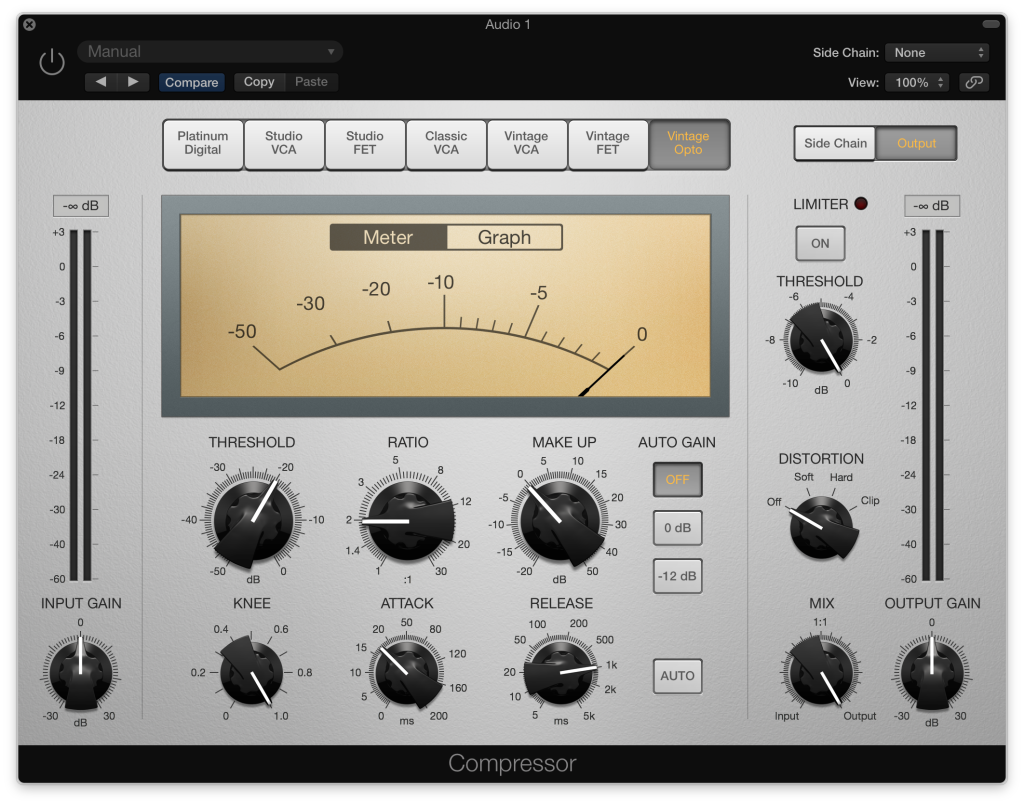 Last but not least the Vintage Opto which is the copy of the Teletronix LA2A, a must-have compressor for any engineer. The original hardware version of this compressor has only two control knobs: gain and peak reduction. As you can read on the user manual, the attack is very fast and the release time is approximately 0.06 seconds for 50% release, 0.5 to 5 seconds for complete release depending upon the amount of previous reduction. The peak reduction knob controls both the threshold and the amount of compression.